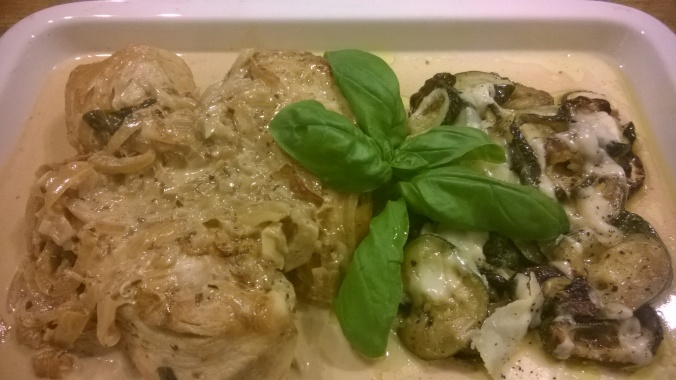 In our search for the ‘interesting & different’, we sometimes overlook the classics. The joy of this dish is that it’s so incredibly straightforward, yet tastes as if you’d been slaving for hours! Use any cut of chicken you like, but chicken breasts are by far the quickest. On a week-night, that can be a real blessing!

The addition of double-cream makes the sauce velvety smooth; so professional that people will think you’ve graduated from the Cordon Bleu school of French cookery! No carbs, no guilt. Just pleasure.

In a thick-based sauté-pan, melt a little butter then add your chicken. Seal on both sides until it’s golden brown and caramelised. I say the following again and again… do not poke at it or move the food around in the pan until it’s ready to be turned. No-one likes to be mothered and the same goes for your dinner! Don’t fuss at it. If you attempt to move it too early, you risk ‘tearing’ the meat’s surface, and you’ll never develop the caramelised, seared-on crust that de-glazes from the bottom of the pan & adds richness and depth to the sauce. Touch it gently with your finger; if it comes away from the pan’s surface with no resistance, then it’s ready to be turned. If it stays put, then the surface hasn’t sufficiently sealed / caramelised & it needs to cook a little while longer. Equally, never ‘crowd’ the meat in the pan. If it’s too close together, you lower the temperature in the pan and the food starts to steam not sauté. Trust me and try it; the results will speak for themselves!

Lecture over (sorry). Add sliced onions and some finely-chopped / crushed garlic a minute or so later. Cook on a medium heat, ensuring that the onions don’t brown; rather go soft and translucent. Then crank up the temperature and de-glaze the pan with a little white-wine to release the flavour. I always love the big, heavy ‘sigh’ it gives, as the liquid comes into contact with the hot metal and evaporates. Italians call this ‘il sospiro’, literally ‘the sigh’; it’s the perfect word for it, and the sign that you can finally relax after a long day…!

Pour in chicken stock (or water and stock cubes) until the contents are waist-deep in liquid. Add chopped tarragon and season. Leave to cook on a low heat until the sauce has reduced to half its volume. You can do this on the hob, or in the oven.

Meanwhile, roughly slice your courgettes. Throw on some chopped garlic and mix in a roasting-dish with a thick coating of olive-oil. Season and roast for half an hour until the courgettes are soft and unctuously delicious. Grate on a good whack of strongly-flavoured hard-cheese (I used cheddar), then place until the grill until golden brown.

Whilst this is browning, stir a generous amount of double-cream into the chicken. Cook on the hob for a minute or so, stirring occasionally until it thickens. Serve up the chicken & gratin side-by-side, piling the onions and sauce all over the dish in ‘generous, luxurious lashings’. Finish with a final flourish of chopped herbs and dig in! There’ll not be an ounce left on the plate!

One thought on “Chicken in a Creamy White Wine, Tarragon-Sauce with Roasted Courgette-Gratin – A timeless classic that’s quick, easy & full of flavour. A foolproof, low-carb masterpiece!”