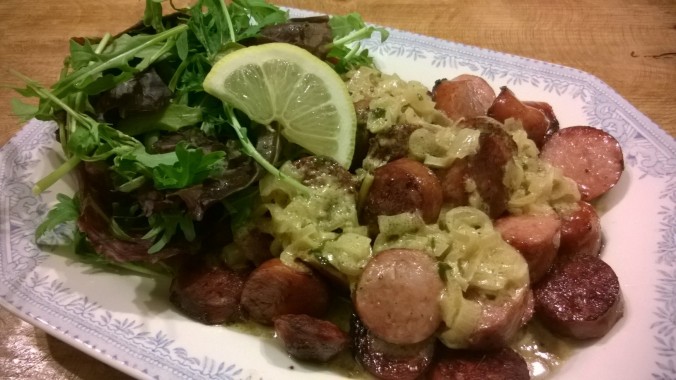 Few dishes can abound in flavour as much as this one! Hot smoky paprika, fiery mustard & peppery rocket-leaves; all tempered by the rich warmth of chicken-stock and the creamy smoothness of butter. I love the food of Eastern Europe. There’s a fresh vibrancy to it, that’s like no other.

But behind the often confrontational flavours lies a timeless polish; a food-culture that’s cherished and valued, passed down with diligence from generation to generation like the most precious of treasures. This is not the food of urban restaurants and cookbooks; rather the cuisine born of warm kitchens, family-mealtimes and love. It’s good, plain, honest fare which nurtures & satisfies; and for this reason, I applaud it wholeheartedly!

Silesia is a region that has seen its fair share of history! Once part of Bohemia, it has since passed through Austrian hands, been part of Germany, Poland and Czechoslovakia. Its food speaks of all these places; possessing a rich diversity all of its own.

For those on a low-carb diet; the warm ‘heartiness’ of such cuisine is a true god-send! A lot of recipes lacking in carbohydrate also lack body and substance. Well this dish is succulent, tasty and filling. Diabetics & gluten-intolerants can also share in the feast. There’s even room for the paleo-fans, if they so wish! Now we’re all gathered, it’s time to start cooking…

Begin with your mustard-sauce. Finely slice a couple of shallots, or half an onion; and sauté these in butter until soft, tender & translucent. Cover to half an inch in depth with boiling water and stir in half a chicken stock-cube. Season well and add a generous rounded teaspoonful of Dijon mustard. Simmer lightly for 15 minutes or until the sauce has reduced by half, and is thick and glossy. Finish it to perfection with a good whack of finely chopped basil.

Meanwhile slice your Polish sausages into half-inch chunks. The sausage can be sokolow, kielbasa or anything you can get your hands on. As long as it contains paprika and garlic you should be fine! Sauté these in a thick-bottomed pan for three to five minutes, stirring occasionally. Once they’re browned and golden, you’re ready.

Tumble your sausages into a pre-warmed serving dish and pour your mustard-sauce all over. Serve with handfuls of peppery rocket-salad or watercress; no dressing, just beautifully natural!

I prepared this as a starter; but it would equally do you proud as a main course, served with steamed vegetables in place of salad.

All that’s left is to dig in! Delicious!